The 1st Annual Stevens Point School District Turkey Trot was run Wednesday, November 23. The event, organized as far as I could tell by two SPASH teachers, was run at Bukolt Park in downtown Stevens Point on the banks of the Wisconsin River.

Our information about the race was limited to some word of mouth details of a “non-competitive 5k and kids race with an entry fee of at least one non-perishable food item for the local food pantry.” The price was right and the likely routes along the Wisconsin River are some of my favorite places to run.

It took a bit of organizing around the house to determine which combination of adults and kids at our house would run. We settled on me running with our son, our daughter going to daycare as scheduled, and my wife running from home with a friend for a regular training run. Michael and I had our usual breakfast (me – oatmeal. Michael – cereal and a bagel).

The race was held on Wednesday. Kids in our district didn’t have school today. I asked one of the race organizers why she chose Wednesday and she simply said, “I am doing other stuff tomorrow.” A Thursday Turkey Trot might draw more people, but it also has to compete against other activities and distractions.

The starting area was a loose gathering of runners in a parking lot with a folding table piled high with food donations. In our small community we knew several other runners from the YMCA, school, and other running events.

The kids race was held before the 5k and was a 400m (or close) loop around the pond and back to the starting area. A vigorous group of kids toed the starting line with lots of cheers. We all counted down and they were off. Michael led the pack from the starting line.

He held is lead until about the halfway point when he was passed by another kid.

With the finish line in sight I urged him to catch the leader. He found his second wind, caught the leader, and it was a photo finish.

As Michael said, “We could replay that finish a 1000 times and still not know who the winner was.” I think he got that either from the Cars movie or listening to Darrel Waltrip commentary on NASCAR races.

The course was a loolipop. We ran south to the Main Street bridge, ran around a single block north of Main Street, and retraced our steps back to the start area which included a second loolipop around the Bukoldt park pond. The field of 5km runners was more than 25 and less than 50 with all age groups represented. 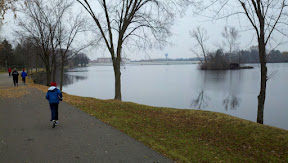 Michael and I had a strategy to jog, walk, jog, walk … repeat … until we saw the finish line and then our plan was sprint to the finish. We executed that race strategy. Michael kept a pretty consistent tempo, enjoyed seeing other runners, and regularly asked about our miles run and total running time.

The course had a pretty significant surface hazard … copious duck and goose poop. We had to do lots of careful footwork to avoid a squish.

Just before the 1 mile mark we saw the race leader running towards us. There was another surge of runners that passed before we got to the loolipop turn around. We held off the runners/walkers that were behind us.

Michael’s attitude was positive throughout. He acknowledged that running 3.1 miles is very difficult. He also talked a lot about telling his gym teacher that he ran 3.1 miles. A great accomplishment for a 1st grader.

Once the finish line, at the Bukolt Park Beach House, was in sight we sprinted to the finish.

We appreciated the cheers of other runners and the race organizers. Michael received a prize for his 1st place tie in the kids race. We both enjoyed some warm apple cider and cheered for other finishers.

We stopped at Colligans Bakery for donuts. Much to my surprise and disappointment they were cleaned out of donuts. I settled for an apple turnover instead of my usual cream filled chocolate long john. Michael enjoyed a giant frosted cookie.

Next on our post race recovery – watching Return of the Jedi.

I hope the Stevens Point School District Turkey Trot will repeat in 2012. With a little more promotion attendance could surge. I was glad to help a local fitness event, donate to the food pantry, and cheer my son to his first 5km race finish. Way to go Michael!